Framed by spectacular subterranean bermed pavilions of the Lefrak Skating Center at Prospect Park, the jewel is the starry roof ceiling floating above the rink space, featuring a scattered grid of luminaries installed and lit by EGG Electric. Sciame Construction hired EGG to bring the electric of this breathtaking project alive, and EGG was tasked with the complete electrical installation for the center, including furnishing a brand new power service, distribution system and all of the signature light fixtures. Our Fitout of the center included power to the mechanical and plumbing systems that run the rink system, run the summertime water feature and color light show, and even the Zamboni machine.

EGG approached this elegant ground up project by keeping the interior space clear of as much electric work as possible, to allow for future modification. To do this, EGG electricians buried nearly the entire power system underneath the floor slab of the center, allowing it to be installed almost completely before the structure was even complete. A challenge was verifying every conduit was correctly installed before the pour, as there was no going back- EGG met that challenge by careful planning, measurement and verification of the layout on site before the pour. The EGG team also installed all the exterior site electric, such as furnishing Custom Light Poles for the rink, and supplying power underwater to a nearby island off shore in Prospect Park lake.

The EGG team’s greatest satisfaction from working with Sciame to realize electrical at the Lefrak center is best embodied in the time our employees have on the ice with their own children – looking up, enjoying the project themselves with a childlike wonder. 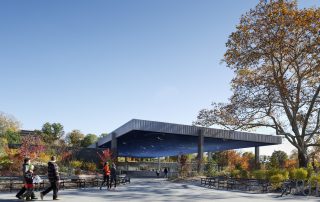 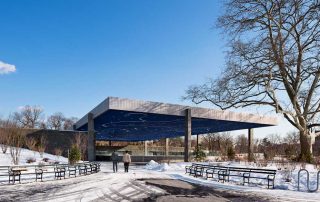 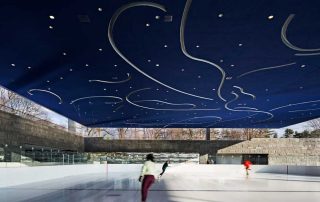 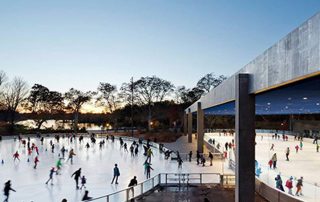 New power service to Lefrak center was run through prospect park underground from the street – to avoid damaging valuable grand trees, EGG site surveyed every plant along the route, and optimized it to bring power yet keep from damaging tree roots.